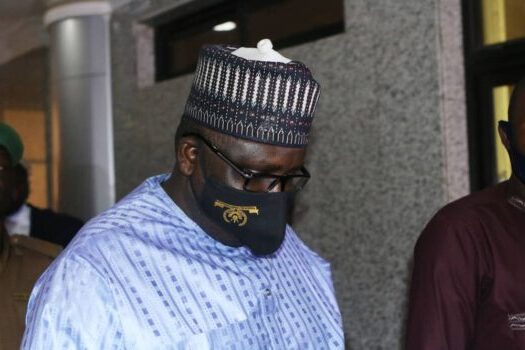 Justice Abang said though it was at the court’s discretion to grant bail, the ex-Pension Reform boss did not deserve another bail after jumping the first one.

Mr Abang ruled that Mr Maina was not only a flight risk, but a proven risk, having fled to the Republics of Niger and Chad in violation of the court’s terms and conditions for the previous bail granted him.

Ruling on the matter, the judge, Okon Abang, said Mr Maina, who jumped bail last year, “has disappointed the court.”

He said the defendant, who is being prosecuted for laundering N2billion in pension funds, failed to place sufficient materials before the court to support his fresh application for bail.

Justice Abang, who refused to grant Maina’s application for an order directing the Economic and Financial Crimes Commission to release his confiscated property, including a BMW car, also dismissed his request for an order to set aside the November 18 and December 4, 2020 orders.

But Maina, who jumped bail last year and fled to the Republic of Niger before his rearrest, had on December 24, 2020, applied for another bail.

Maina, through his lawyer, Anayo Adibe, on January 20, approached Justice Abang in a motion on notice.

He argued that the application became necessary over his worsening health condition.But the judge said the medical report brought from the University of Abuja Teaching Hospital showed that Maina was not under any medical emergency.

In the motion, the ex-pension boss told the court that he had reasonable and responsible sureties who were willing to act as sureties if granted bail.

Debunking the argument that he had jumped bail, Maina said he fled to the Republic of Niger to have a knee surgery.

According to him, If the knee surgery had not been done, his leg would have been amputated.

The defendant, whose escape landed his surety, Ali Ndume, a serving senator, in jail for few days, was later apprehended after the court issued a warrant for his arrest.

Mr Maina was brought back to court on December 4, 2020, even though the judge had ensured his trial continued in his absence.

He had barely spent three weeks in remand when he filed another bail application on December 24, asking for fresh bail, anchored on his alleged deteriorating health.

Counsel to EFCC,  Mohammed Abubakar, at the hearing, urged the court to dismiss it, insisting that that the defendant did not deserve a second chance.

Mr Abubakar said the affidavit filed by the defendant in support of the bail application showed that he took the premeditated decision to jump bail and showed no remorse about it.

He noted that “The 1st defendant/applicant (Maina), without any remorse, stated in paragraph 9 of his affidavit that, as a result of the order for his arrest, he decided to seek a better medical facility for the treatment of his knee and was eventually referred to a military hospital in Chad Republic and Niger Republic where the knee surgery was successfully carried out.”

The prosecutor said the implication of Mr Maina’s claim was that “his jumping bail was a premeditated decision. It was a decision he took y himself in disobedience to the gracious order of this honourable court in releasing him on bail.”