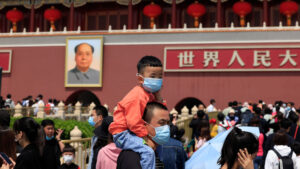 China’s weak population growth is falling closer to zero as fewer couples have children, government data showed Tuesday, adding to strains on an aging society with a shrinking workforce.

National Bureau of Statistics announced after a once-a-decade census. It said annual growth averaged 0.53%, down by 0.04% from the previous decade.

Chinese leaders have enforced birth limits since 1980 to restrain population growth but worry the number of working-age people is falling too fast, disrupting efforts to create a prosperous economy. They have eased birth limits, but couples are put off by high costs, cramped housing and job discrimination against mothers.

The percentage of children in the population edged up compared with 2010, while the share 60 and older rose faster. The pool of potential workers aged 15 to 59 shrank to 894 million, down about 5% from a 2011 peak of 925 million.

Changes in birth limits and other policies “promoted a rebound in the birth population,” Ning said. However, he said there were 12 million babies born last year, which would be down 18% from 2019’s report of 14.6 million.

The latest data put China closer to be overtaken by India as the most populous country, which is expected to happen by 2025.

India’s population last year was estimated by the U.N. Department of Economic and Social Affairs at 1.38 billion, or 1.5% behind China. The agency says India should grow by 0.9% annually through 2025.