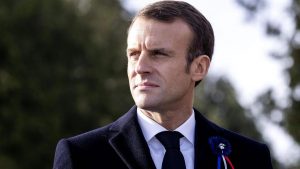 French President Emmanuel Macron was slapped in the face by a man on Tuesday during a visit to a small town in southeastern France, an incident that prompted a wide show of support from French politicians from all sides.

The French president was greeting the public waiting for him behind barriers in the town of Tain-l’Hermitage after he visited a high school that is training students to work in hotels and restaurants.

A video shows a man slapping Macron in the face and his bodyguards pushing the man away as the French leader is quickly rushed from the scene.

A bodyguard, who was standing right behind Macron, raised a hand in defence of the president, but was a fraction of a second too late to stop the slap. The bodyguard then put his arm around the president to protect him.

Macron just managed to turn his face away as the attacker’s right hand connected, making it seem that he struck more of a glancing blow than a direct slap.

The man, who was wearing a mask, appeared to have cried out “Montjoie! Saint Denis!”, a centuries-old royalist war cry, before finishing with “A bas la Macronie”, or “Down with Macron”.

In 2018, the royalist call was cried out by someone who threw a cream pie at far-left lawmaker Éric Coquerel. At the time, the extreme-right, monarchist group Action Française took responsibility for that action. Coquerel on Tuesday expressed his solidarity with Macron.

In an interview with the Dauphiné Libéré newspaper later Tuesday, Macron played down the incident, which had made nationwide headlines, calling it an isolated incident perpetrated by an “ultra-violent” individual.

“I am doing fine. We must put this incident, which I think is an isolated event, into perspective,” he said, and added: “Let’s not let isolated events, ultra-violent individuals… take hold of the public debate: they do not merit it.”