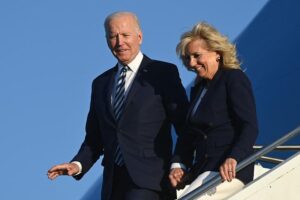 President Joe Biden arrived in Europe Wednesday on his first overseas trip as the U.S. leader, set to hold high-level talks with other Western heads of state before meeting next week with Russian President Vladimir Putin at a summit in Geneva.

The first stop was at RAF Mildenhall in the United Kingdom, where he addressed U.S. troops.

“To all you airmen and soldiers, I want to say, thank you. We owe you. We’re so damned proud of you,” Biden said.

He also took a swipe at Russian President Vladimir Putin, who he will meet later in the trip.

“I’ve been clear — the United States will respond in a robust and meaningful way when the Russian government engages in harmful activities,” Biden said.

The president also said he will be reassuring allies about the U.S. role in the world.

“At every step of the way, we will let everyone know that the United States is back.”

As he boarded Air Force One, Biden said his goals for the trip were strengthening ties with allies, while “making it clear to Putin and to China that Europe and the United States are tight.”

Biden also said he would be announcing a new strategy for vaccinating the world against the coronavirus pandemic.

As the president left for Britain, the White House said the trip “will highlight America’s commitment to rallying the world’s democracies, coming together to shape the rules of the road for the 21st century, defend our values and tackle the world’s biggest challenges.”

He and first lady Jill Biden are also meeting Sunday with Queen Elizabeth II at Windsor Castle before leaving for a NATO summit in Brussels on Monday.

While in the Belgian capital, Biden will hold separate talks with Turkish Prime Minister Recep Tayyip Erdogan, a NATO ally who has angered Washington by his go-it-alone stance in buying a Russian-made air defense system that is incompatible with NATO’s.

In Geneva on Wednesday, Biden is meeting with Swiss Confederation President Guy Parmelin before his potentially contentious sit-down with Putin — the first time the two leaders have met face-to-face since Biden became president.