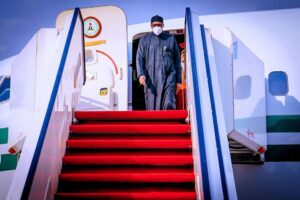 The President whose jet touched down at the Nigerian Air Force base in Maiduguri around 10.10am was received by the state governor, Babagana Zulum.

The President is accompanied by Chief of Defense Staff, Gen. Lucky Irabor and other service chiefs.

Buhari is expected to visit the Palace of the Shehu of Borno, meet with troops of Operation Hadin Kai and commission over 10,000 housing units constructed for Internally Displaced Persons (IDPs).

The governor, had in a statement on Wednesday said: “President Muhammadu Buhari will be coming to Borno State on Thursday, the 17th of June, 2021.

“The President is coming to appraise security situation in the northeast, during which he will commission some of the developmental projects executed by the state government.

“The President will also commission the first phase of 10,000 houses which he generously approved and funded, for the resettlement of IDPs and refugees.”