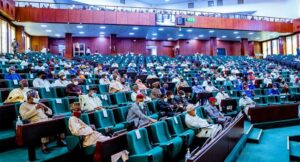 The House of Representatives has stepped down the controversial Petroleum Industry Bill after an hour-long closed-door session.

Further deliberation is expected to hold over the decision while the House is on recess.

The report from the conference Committee between the House and Senate, which harmonised the two versions earlier passed, was to be laid and considered by the House on Thursday.

Earlier, the House had a rowdy session before the commencement of the plenary.

The South-South lawmakers were heard chanting “five per cent” as against the three pre cent at the floor of the House.

Meanwhile, in the Senate, the three per cent allocation to host communities was adopted despite protests by the senators.

The Speaker, Femi Gbajabiamila, called for an executive session which lasted over one hour.

Upon resumption, the report, which was on the Order paper, was stepped down by the Chairman of the ad hoc committee on PIB, Mohammed Monguno (APC, Borno).

The number in dispute is the percentage of the total operating expenses (OPEX) oil companies are expected to contribute to a trust fund created for host communities.