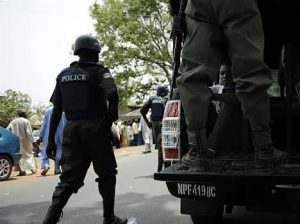 Three men suspected to be involved in the kidnap of 136 students of Bethel Baptist School, Kaduna, have been arrested by the police.

Those apprehended by the security operatives are Adamu Bello, Isiaku Lawal, and Muazu Abubakar.

The Force Public Relations Officer, Frank Mba, paraded the trio on Thursday at the office of the Special Tactical Squad (STS) in Abuja.

Clad in military uniform, Adamu, Lawal, and Abubakar were among the 50 suspects paraded for kidnapping, drugs use and distribution, and arms dealing, among other offences.

The suspects said they were part of a 25-man gang that carried out the attack on the school in July, claiming that they received the sum of N100,000 naira each for their roles.