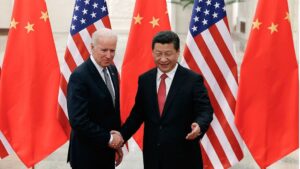 Taiwan was high on the agenda, with Xi warning that the island’s leaders are trying to “rely on the US for independence.”

“Some people in the US intend to ‘use Taiwan to control China,'” Xi was quoted as saying by state media agency Xinhua.

“This trend is very dangerous and is like playing with fire, and those who play with fire will get burned.”

Biden said the US remained committed to the “One China” policy, which recognizes Beijing but allows informal relations and defense ties with Taipei.

“On Taiwan, President Biden underscored that the United States […] strongly opposes unilateral efforts to change the status quo or undermine peace and stability across the Taiwan Strait,” the White House statement said.

“It is the most important and sensitive issue in China-US relations.”

The two leaders also spoke about issues ranging from Tibet, Hong Kong and Xinjiang, said a statement from the White House. “President Biden raised concerns about the PRC’s practices in Xinjiang, Tibet, and Hong Kong, as well as human rights more broadly,” according to US officials.

“We have a responsibility to the world and to our people,” Biden said at the start of the meeting. He added that “all countries have to play by the same rules of the road.”

The two leaders traveled together when both were vice presidents and know each other well, but they haven’t had a face-to-face meeting since Biden became president.

“I am very happy to see my old friend,” Xi said at the start of the meeting.

The Chinese leader told his US counterpart the two sides should improve communication in light of global challenges such as the coronavirus pandemic.

“I stand ready to work with you, Mr. President, to build consensus, take active steps and move China-US relations forward in a positive direction,” said Xi.