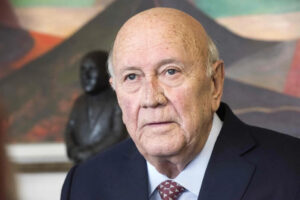 “I, without qualification, apologise for the pain and the hurt and the indignity and the damage that apartheid has done to Black, Brown and Indians in South Africa,” said de Klerk, who had previously expressed regret several times for the 1948-91 policy.

De Klerk died aged 85 after a battle with cancer.

He won praise worldwide for his role in scrapping apartheid and shared the Nobel Peace Prize with Mandela in 1993. The following year Mandela won South Africa’s first multi-racial elections with his African National Congress (ANC).

“Allow me in this last message to share with you the fact that since the early 80s, my views changed completely. It was as if I had a conversion,” de Klerk said in the video message released by his foundation hours after his death.

“And in my heart of hearts, I realized that apartheid was wrong. I realized that we had arrived at a place which was morally unjustifiable,” he said, adding that action was then taken to negotiate and restore justice.

“He took the courageous decision (as president) to unban political parties, release political prisoners and enter into negotiations with the liberation movement amid severe pressure to the contrary from many in his political constituency,” he said.