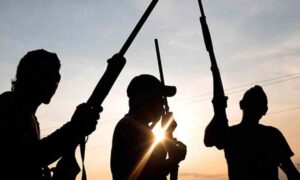 No fewer than 11 people have been killed during an attack by suspected bandits at Kurmin Masara community in Zango Kataf Local Government Area of Kaduna State.

The incident occurred in the early hours of Sunday when the attackers were said to have stormed the community while the residents were still asleep.

Hon. Francis Angwa Sani, Executive Chairman of Zangon Kataf Local Government Council told journalists on the phone that there was an attack on the community.

” There was an attack but I don’t have the details now,” he said.

Samuel Aruwan, Commissioner, Ministry of Internal Security and Home Affairs, Kaduna State has in a statement, confirmed the development.

He stated thus: “Security forces have reported to the Kaduna State Government that Kurmin Masara general area of Zangon Kataf LGA was attacked in the early hours of today. “

“According to the reports, troops of the Nigerian Air Force Special Forces who responded to distress calls from the area also fell into an ambush as they mobilized to the scene of the attack.”

“The troops cleared the ambush and reached the general area, along with troops of Operation Safe Haven (OPSH).”

“As of 4:30 PM, eleven residents were confirmed killed, and some inflicted with gunshot injuries.”

“The victims confirmed killed are listed as follows: Elizabeth Ayuba

“Over thirty houses and properties were burnt in the attack. The injured were evacuated for treatment. Search-and-rescue operations and pursuit of the attackers are in progress on different fronts.”

“The Government of Kaduna State will make public further details as soon as they are received from security forces.”

“Governor Nasir El-Rufa’i, who has been in touch with the security forces and is receiving hourly briefings, expressed sadness at this report of the latest in a series of attacks in the area.”

“He prayed for the repose of all those killed and conveyed his condolences to their families. He further wished the injured a speedy recovery.”