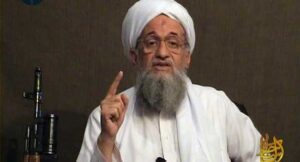 Zawahiri’s assassination is the biggest blow to Al-Qaeda since US special forces killed Osama bin Laden in 2011.

“Justice has been delivered and this terrorist leader is no more,” Biden said in a special televised address from outside the White House.

Intelligence had located al-Zawahiri’s family in Kabul earlier this year, Biden said, adding that no members of the family or civilians had been killed in the attack.

An Egyptian surgeon with a $25m reward on his head, al-Zawahiri helped coordinate the September 11, 2001 attacks on the US that killed nearly 3,000 people.

A senior administration official said the 71-year-old Egyptian was on the balcony of a three-storey house in the Afghan capital when targeted with two Hellfire missiles after dawn Sunday.

“We identified Zawahiri on multiple occasions for sustained periods of time on the balcony where he was ultimately struck,” the official said.

The house is in Sherpur, one of Kabul’s most affluent neighbourhoods, with several villas occupied by high-ranking Taliban officials and commanders.

In a statement, US Secretary of State Antony Blinken said al-Zawahiri’s presence in Kabul “grossly violated the Doha Agreement and repeated assurances to the world that they would not allow Afghan territory to be used by terrorists to threaten the security of other countries”.

Washington and the Taliban signed the deal in 2020, paving the way for the withdrawal of US-led foreign forces in return for a guarantee from the Taliban not to allow groups such as al-Qaeda and ISIL (ISIS) to operate on Afghan soil. The US forces withdrew just before an August 31 deadline in what turned out to be a chaotic exercise.

Blinken said by allowing the al-Qaeda leader to shelter in Afghanistan, the Taliban had also “betrayed” the Afghan people and “their own stated desire for recognition from and normalization with the international community”.