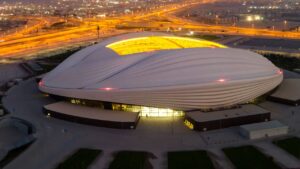 With the World Cup just two days away, Qatar have informed FIFA that they have decided to ban the sale of beer at the country’s eight tournament stadiums.

The only drinks on sale at match-day venues throughout the entire month of World Cup action will be non-alcoholic, as Fifa confirmed on their website.

“Following discussions between host country authorities and FIFA,” their statement reads, “a decision has been made to focus the sale of alcoholic beverages on the FIFA Fan Festival, other fan destinations and licensed venues, removing sales points of beer from Qatar’s FIFA World Cup 2022 stadium perimeters. There is no impact to the sale of Bud Zero which will remain available at all Qatar’s World Cup stadiums.

In September, Qatar said it would permit ticketed fans to buy alcoholic beer at World Cup soccer matches starting three hours before kickoff and for one hour after the final whistle, but not during the match.

Budweiser, which is one of FIFA’s partners, tweeted “Well, this is awkward.”

Budweiser was to sell beer within the ticketed perimeter surrounding each of the eight stadiums before and after each game.