Scroll to Top
Follow
Home » General » Bodies of Africans, Most Likely Including Nigerians, Washed Up On Libyan Coast

Bodies of Africans, Most Likely Including Nigerians, Washed Up On Libyan Coast 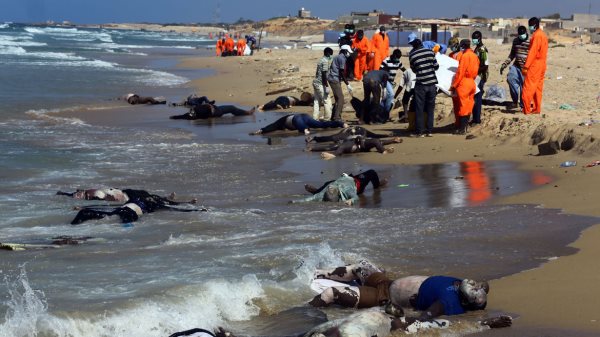 It was a most tragic sight on the shores of the Libyan city of Zuwarah. Over a hundred bodies of Africans who drowned while trying to cross the Mediterranean into Europe were found washed up by the sea last week.

Among the bodies were those of two children and most of the dead were believed to be people from Sub-Saharan Africa. Privileged sources in Libya suspect that most of the casualties would have come from Nigeria, Niger, Mali and Bukina Faso.

A Libyan Navy spokesman, Colonel Ayoub Gassim told the Associated Press that at least 104 bodies had been pulled up but that the death toll was most likely to be higher since the boats used by people smugglers usually carry up to 125 people.

Bodies of the victims were decomposed and so it was difficult for officials to say when they drowned. The UN refugee agency disclosed last Tuesday that at least 880 people had drowned over the last week as a result of shipwrecks. The agency also disclosed that people smuggling and departures from the North African coast had surged recently.

Meaning that many more people from Sub – Saharan Africa are desperate to make the terribly risky crossing through the Mediterranean Sea into Italy. Ironically, there are no known wars in the countries producing the highest number of migrants. Even Mali which fought a civil war recently is appreciably peaceful today.

Many of the boats which sank are believed to have taken off from the shore around the cities of Zuwarah and Sabratha which lie on the northwestern part of Libya. Head of the EU’s Mediterranean naval mission has said that people smuggling now accounts for between 30 and 50 percent of the gross domestic product of northwestern Libya.

Migrants are believed to pay these people smugglers hundreds of dollars to get a place on their boats which are often made of “flimsy inflatable craft that either sink or are picked up by international rescue mission.”

Knowledgeable observers attribute the surge in the activities of people smugglers to the Libyan uprising of 2011. The crisis practically tore the nation apart and the coastguards like many other services were either abandoned or neglected. Over 40, 000 people are estimated to have crossed the Mediterranean Sea from North Africa, particularly Libya, into Italy this year alone.