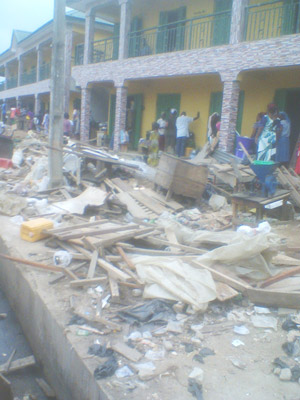 The Lagos State government this morning began a massive demolition of shops at Igando Market. The demolition, according to an official who did not disclose his name, is meant to make way for the construction of the ultra-modern market which is already being built.

Indeed, the new market being built has risen very fast. Within the past three months, many storey buildings have been constructed.

In some of the buildings, the installation of fittings have already begun while in some others, painting work has reached advanced stages.

While many observers are commending the state government for totally transforming the market, many traders are lamenting their losses in terms of property and rents that have not been exhausted. As it is, more than 60 per cent of the existing traders at the market have been cut off from the benefits of a new, ultra-modern market. They could not afford the cost of buying one of the new shops for N3 million.

Another angle to the demolition is the complaints by the traders that they were not given adequate notice about what the government planned to do. A female trader who sold foodstuff at the market had this to say to People & Power’s reporter:

“This side of the market (close to the LG shop), we paid N10,000 each for the place to be built. We came this morning to see that everything has been brought down. Some of us now have nowhere to go. How do we feed our families?” 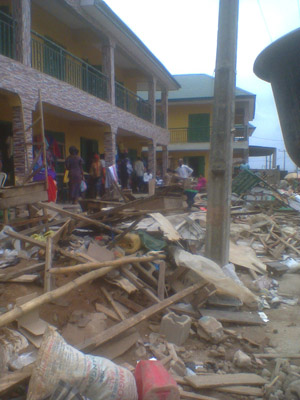 A male trader at the Ikotun Road side of the market also had this to say: “I wasn’t expecting anything. Someone called me on phone this morning that my shop had been demolished that was why I hurried to this place. Now, no hope for us. We were not even given the chance to pack our wares. Everything is gone.”

It was the same story from a medicinal herbs dealer, locally referred to as “Iya Alaagbo.” She claimed: “I came back from the market where I buy my herbs and other materials yesterday and re-stocked my shop. I came this morning to see this. Look at my shop. It has been levelled.”

Yet, the Lagos State official had this to say: “Look at this massive construction work going on. The work has reached a stage where they have to leave so that those working on the buildings would have the space to complete their work.We are not happy they are losing their wares but just look at the place. Are they saying they have not been seeing the work going on or they expected the construction to be done on top of them.”