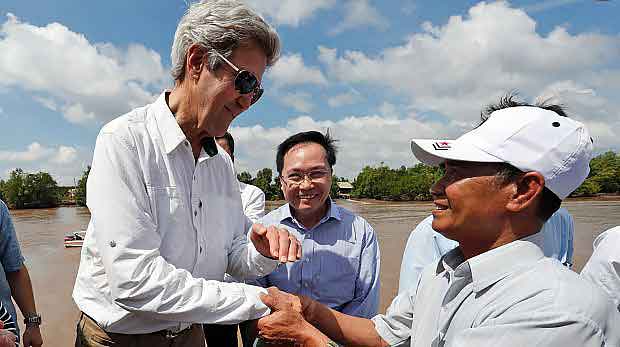 U.S. Secretary of State, John Kerry visited on Saturday, the site where he killed a Vietnamese soldier in a 1969 Vietnam War battle that earned him a Silver Star. It so happened that John Kerry as a young naval officer in his mid-twenties had his boat attacked by the Viet Cong on the Mekong river.

Kerry met with Vo Ban Tam, a 70-year old veteran who was part of the team that ambushed his boat. The veteran claimed the soldier Kerry killed was his then 24 year-old friend Ba Thanh. The two retired soldiers shook hands and Kerry gave Ban Tam a commemorative Challenge Coin.

When the Secretary of State returned from the Vietnam war, he was also given the Bronze Star and three Purple Hearts. John Kerry became a leader of the group, Vietnam Veterans Against the War, speaking to members of the Senate Foreign Relations Committee and making headlines at a Washington protest by disposing of his medals on the Capitol lawn. Kerry later said that the medals belonged to someone else.