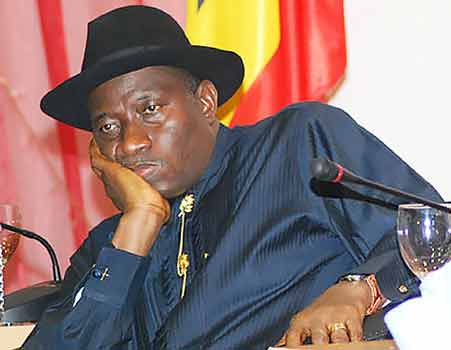 Some Northern clerics, under the auspices of the Middle Belt Patriotic Front (MBPF), have condemned comments made by the Former President of Nigeria, Goodluck Jonathan on the crisis in the region.

Speaking to journalists yesterday, the national chairman of the group, Mr. Musa Fomson urged security agents to invite the former president for questioning, on the statements he made last week in a meeting with the United States Congress.

Fomson said an invitation and interrogation of Jonathan will enable security agencies unravel his true intentions about Nigeria.

“It was the mindlessness of his administration that amplified the schism to a point where persons that were once neutral learnt to hate the adherents of other faiths. It was Goodluck Jonathan that made religion and ethnicity into campaign issues in order to cover the incompetence of his rule in the quest for re-elections,” Fomson said.

He further went on to stress that Jonathan failed to tell his US audience that killer herdsmen would not be on rampage and occupy the position of the fourth deadliest group in the world if he and his aides had not stolen money meant for buying weapons to defeat Boko Haram.

“If Goodluck Jonathan truly loves Nigeria, he must immediately stop all his subversive activities like the speech he made before the US committee in which he usurped the role of a sitting government by negotiating a US intervention.”

He blamed the former President for the present hardship faced by Nigerians, asserting that Jonathan made a “coded call” to the militants in the Niger Delta as well as their proxies operating as separatists in the South-East to scale up attacks when he said “the military crackdown in the Niger Delta would not end the agitation there. It will have the opposite effect of provoking the youth which will cause them to seek to acquire more sophisticated weapons to defend themselves and their communities.”