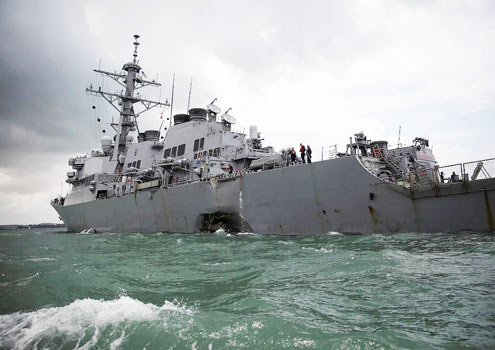 At least 10 United States marines have been reported missing after their warship, the USS John S. McCain collided with an oil tanker near Singapore on Monday morning.

The collision which was the second involving a ship from the US Navy’s 7th Fleet in the Pacific, occurred around 5:24 a.m. east of Singapore leaving the guided-missle destroyer with a damaged hull after it collided with the 183-meter (600-foot) Alnic Mc reportedly owned by a Greek-based shipping company, Stealth Maritime Corporation.

The McCain, which has already docked at the Singaporean Naval Base with significant damages was heading to Singapore on a routine port visit after conducting a sensitive freedom-of-navigation operation last week.

A statement released by the Navy’s 7th fleet said the damage to the warship’s hull led to a flooding of adjacent compartments including the crew berths, machinery and communications rooms.

The Singaporean government however said no crew were lost on the Liberia-flagged Alnic which sustained damage to a compartment to the front of the ship some seven meters above its waterline adding that there were no reports of a chemical or oil spill as a result of the impact.

Vessels as well as personnel from the United States, Indonesia, Malaysia and Singapore have already been deployed to search for the missing sailors.

Although there was no immediate explanation for the cause of the accident, the Navy said an investigation would be conducted to ascertain the causes of the collision in the  Malay Peninsula which is one the world’s busiest ports, accommodating a naval base which is frequently visited by American warships.