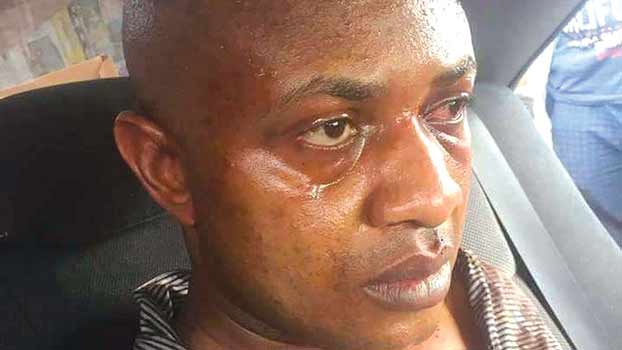 Billionaire kidnap suspect, Chukwudumeme Onuwuamadike, alias Evans on Wednesday pleaded guilty to the charges of kidnapping brought against him by the Lagos State Government.

Arraigned alongside five of his accomplices, Uche Amadi, Ogechi Uchechukwu, Okwuchukwu Nwachukwu, Chilaka Ifeanyi and Victor Aduba,  Evans quickly responded with a plea of “I am guilty” when the two count charges of kidnapping and conspiracy brought against him by the state were read to him.

Security around the premises of the Ikeja High Court where the high profile suspected kidnapper was arraigned was water-tight with the court’s security personnel, heavily armed policemen and soldiers  stationed  around the court premises.

While Evans, Amadi and Nwachukwu pleaded guilty to the charges, the trio of Ifeanyi, Aduba and Uchechukwu, the only female defendant pleaded innocence of the offences read in the charges.

According to the prosecution led by the Lagos State Attorney-General and Commissioner of Justice, Mr. Adeniji Kazeem, the accused persons committed the offence of conspiracy at 7:45pm on February 14 on Obokun Street, Ilupeju, Lagos where, armed with guns and other dangerous weapons, captured and detained one Mr. Duru Donatus following which they collected the sum of 223,000 euros from the family of Donatus for his release.

Counsel to Evans, Mr. Olukoya Ogungbeje told the court that he and his defence team had not had the chance to confer with their clients as they knew about their arraignment on the same Wednesday that they were brought before the court. He told newsmen that Evans could have pleaded guilty out of pressure or ignorance.

Ogungbeje said he will not be challenging the application from the learned Attorney-General that the six accused person be remanded at the Kirikiri Maximum Prisons until October 19 when the case comes up for trial.