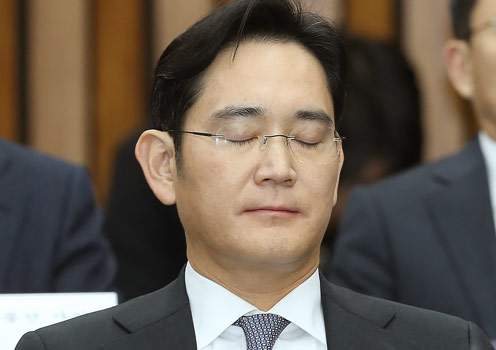 Lee Jae-Yong, the heir to one of the world’s biggest smart phones and electronics maker, Samsung was on Friday sentenced to five years in prison for bribery and other offences.

The 49-year-old Lee, who arrived the Seoul Central District Court in handcuffs and carrying an envelope of documents, was charged in connection with the scandal that ousted  former South Korean President, Park Gean-Hye.

Lee, who served as the Vice – Chairman of Samsung Electronics was found guilty of bribery, embezzlement, perjury and other charges bothering on payments and promises by Samsung totaling around $40 million made to Park’s secret confidante, Choi Soo-Sil.

The defense counsel had denied the charges claiming that Lee made the donations under duress and that he was not aware of the transactions and therefore did not approve them.

So far, Samsung seems to have been unaffected by Lee’s absence as a result of his detention in February having made profits on the back of strong demands for its memory chips. Observers however believe Lee’s penalty could leave the electronics giant without a guiding principle which may hamper its ability to make key decisions on investments for years.

One thought on “Heir To Samsung Jailed Five Years For Bribery”