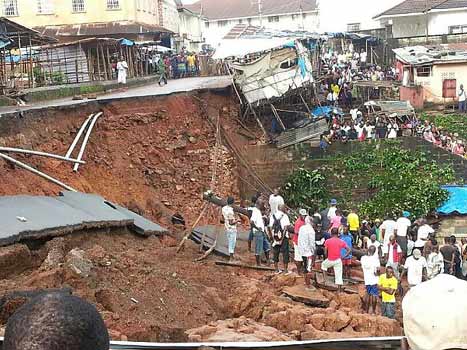 The Vice President of Sierra Leone, Victor Bockarie Foh has said that he fears hundreds of people may have been killed by the mudslide that struck the outskirts of the country’s capital, Freetown early Monday.

According to reports, dozens of bodies have been retrieved and evacuated from Guma in Regent and Wortema even as emergency services continue to search for survivors trapped in the wreckage which was caused by a collapsed section of a hill, following heavy rains.

Over 200 unidentified corpses made up of at least 60 children have so far been conveyed to the Connaught Hospital mortuary. Over 100 persons  have been confirmed dead in the Regent landslide while more than 50 people are feared dead at Mortema.

Emergency rescue operations have  been hampered following the split into two, of the road which links Regent village to other towns, as it has severely restricted both pedestrian and vehicular movement.