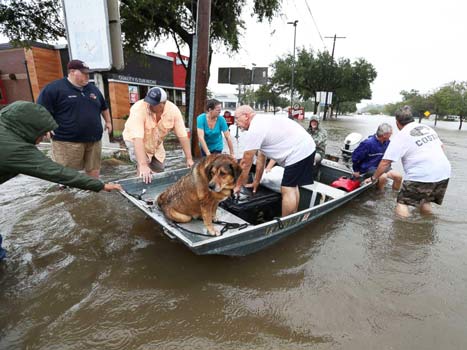 The unprecedented flooding of the city of Houston in Texas, USA occasioned by the much anticipated Hurricane Harvey has reportedly rendered over 30,000 people without shelter.

According to Brock Long, Chief of the Federal Emergency Management Agency (FEMA), an estimated 450,000 people have been affected directly and are expected to file as disaster victims even as the death toll which currently stands at two is expected to rise as the storm continues.

Mr. Long said the Army Corps of Engineers are expected to restore power and other critical infrastructure. However, he said that the two overwhelmed dams in the city are going to be released and will result in even more flooding.

In Houston alone, over 76 cm of rain has been recorded in the last 24 hours with the consequent flooding expected to continue all week.

Governor Greg Abbott on Houston which is the fourth largest American city with a population of 6.6 million, has ordered the evacuation of all seven coastal counties including Corpus Christi and Galveston.

The massive flooding has seen over 2,000 people already rescued. Residents in Houston have been told by local authorities to leave their water-logged homes and seek for shelter overnight.

Many schools, groceries as well as the two airports in the city have been forced to close even as one hospital had to evacuate patients as flood waters caused a power outage.

Although FEMA has set up emergency shelters for displaced persons, the real extent of the damage done by Hurricane Harvey will only be assessed after the flood waters recede later in the week.