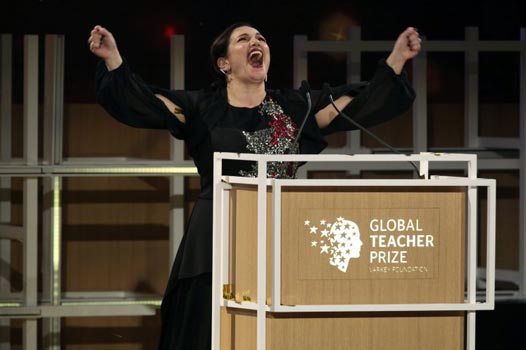 For being named as the Best Teacher in the World, 39-year-old Andria Zafirakou, an Arts and Textiles teacher from Alperton Community School in Brent, north-west London has won the $1million Global Teacher Prize for 2018.

At a star-studded ceremony held on Sunday in Dubai, the United Arab Emirates, Zafirakou upstaged 10 other finalists selected from over 30, 000 applicants from around the world.

Brent, where Zafirakou teaches is widely considered as an ethnically diverse and disadvantaged area and many of her students come from impoverished homes.

According to a statement released by the organizers, the Brent area is also rife with gang violence and Zafirakou faced a “daunting task when she joined the school.”

“But throughout the school and on the streets she is driving change, working closely with the Police to identify potential issues and (gang) recruiters.

“She redesigned the school’s curriculum to resonate with an ethnically diverse student body and learnt the basics of some of the 35 languages spoken at the school to communicate with parents and students.

“She also reworked the school’s timetable to allow girls-only sport, important in a conservative community. The result? A cup-winning girls cricket team,” the statement added.

This is the fourth time The Dubai-based Varkey Foundation is organizing the event and handing out a cash prize which will be paid in equal installments over 10 years on one condition – she continues teaching for at least five years.

Among dignitaries present at the event were Dubai ruler, Sheikh Mohammed bin Rashid Al-Maktoum, British Prime Minister, Theresa May, Formula One Champion, Lewis Hamilton who delivered the trophy among others.