US Deports 86 Ghanaians Out Of 7000 Earmarked For Same Exercise 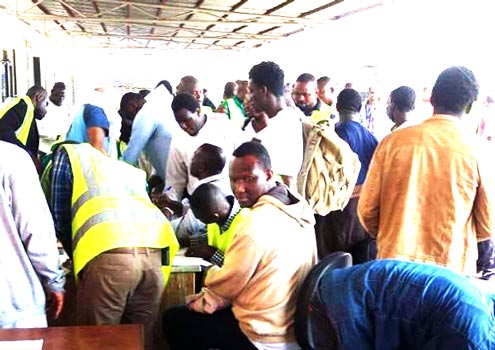 The United States government has hinted that there would be more deportations to follow after 86 Ghanaians were kicked out of the country on Wednesday.

According to reports, the all-male deportees were arrested across the US for offences ranging from abuse of their visas and engaging in illegal employment racketeering.

The deportees arrived at the Kotoka International Airport (KIA) on Thursday on a chartered flight and were profiled by the country’s immigration officials before being allowed to re-unite with their families.

Only four of the deportees had passports while the remaining 82 without the legally required international travel documents, had travel certificates.

A breakdown of the returnees revealed that the people living in Accra, the country’s  capital and the resource-rich middle-belt Ashanti region dominated the list with 37 and 24 persons respectively.

Seven other regions contributed the remaining deportees. There was only one person from the Southern Region while the Central Region did not have a candidate on the list.

The US Ambassador to Ghana, Robert Jackson had last year disclosed that the Trump administration was set to deport more than 7,000 Ghanaians who had abused the terms of their visas and whose processes of deportation were at different stages at that time.

“Infact, about 7,000 of them are currently at different stages of the deportation process. And we are not apologetic about that,” Jackson had said.