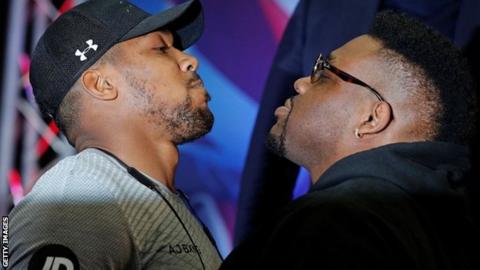 British-born world IBF, WBA and WBO heavyweight champion, Anthony Joshua has called off his much anticipated boxing match with Jarrell Miller after the American failed his second drug test.

Miller, who was expected to square up against Joshua at Madison Square Garden on June 1 had earlier been suspended after a urine sample taken from him on March 20 tested positive to banned substances.

Miller was consequently denied a licence for the June 1 bout. He had then disclosed that he intended to appeal against the decision but following the findings from the second test, he may be slammed with a long-term ban.

Confirming the development, Joshua’s promoter, Eddie Hearn said: “We have now received news from VADA that Jarrell Miller has now failed a second separate test for a further substance.

“AJ’s June 1 opponent will be announced next week. If you don’t think you can beat him clean then delete my number!,” Hearn wrote on Twitter.

The above means that a new opponent for Joshua will be announced next week.