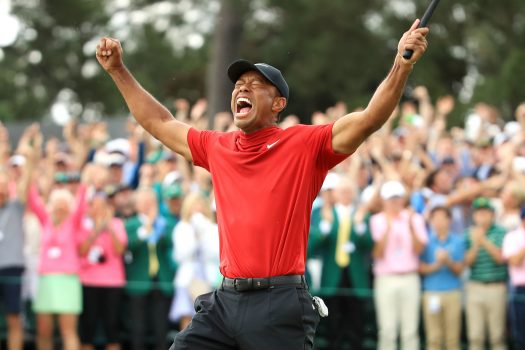 Gulf icon, Tiger Woods on Sunday won the 83rd Masters, capturing his 15th major title after waiting for 11 years to win a great tournament . The victory has been hailed around the world as one of the greatest come-back stories in global sports. Woods fell from grace to grass with scandals and spinal injuries which required surgeries. Now, he is back !

The 43-year-old American who underwent spinal fusion in 2017 clinched the title after firing a final-round two-under par 70 to finish on 13-under 275 for a one-shot victory to capture a $2.07 million top prize and the green jacket, symbolizing Masters supremacy.

The triumph, which was the first major victory for Woods when he did not lead after 54 holes and his fifth Masters title moved him just three shy of the all-time record 18 majors won by Jack Nicklaus.

Woods had served notice that he had returned to form by contending at the British Open last year and the PGA before snapping a five-year title drought by capturing the Tour Championship.

The feat also completes a fairy tale comeback to the pinnacle of golf for Woods whose career imploded after a 2009 sex scandal, amid injuries and other personal problems.

Woods’s first Masters title in 1997 via an astounding 12 strokes left an indelible mark on the sport as he became the first African-American to win golf’s most exalted championship.