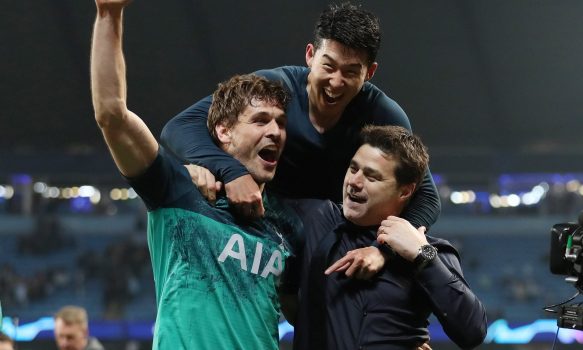 It was all drama at the Etihad Stadium on Wednesday night as Tottenham Hotspurs capitalized on their first leg lone goal victory over Manchester City to qualify for the semi-finals of the UEFA Champions League on away goals rule.

England forward, Raheem Sterling drew the first blood for Manchester City in the fourth minute but South Korea’s Son Heung Min continued from where he stopped in the first leg with a quick brace to put Spurs in the driving seat.

Portugal’s Bernado Silva equalized for the home side in the 11th minute before Sterling scored again in the 21st minute to give City the lead.

The Pep Guardiola-tutored City needed to score again to have an aggregate win and they did just that when Sergio Kun Aguero blasted the ball past Hugo Lloris in the 59th minute.

Llorente scored Spur’s third goal of the night after VAR replays showed that the ball had ricocheted off his laps. City had to score five goals to qualify. They did but the VAR spotted Aguero to be offside just before he slipped the ball to Sterling to score.

In the other game of the night, Liverpool thrashed Porto 4-1 to also qualify for the semi-finals of the UCL with a 6-1 aggregate score line.

Senegal’s Sadio Mane opened the floodgate of goals for Liverpool in the 26th minute. Mohamed Salah doubled their lead in the 65th minute but Porto pulled one back three minutes later through Militao.

However, Firmino and Virgil van Dijk found the net to give The Reds a commanding victory. They will now face Barcelona, who eliminated another English side, Manchester United in the semi-finals.

In the other semi-finals, Tottenham will face giant killers, Ajax Amsterdam who eliminated France’s Paris Saint Germain in the round of 16 and Cristiano Ronaldo’s Juventus in the quarters.