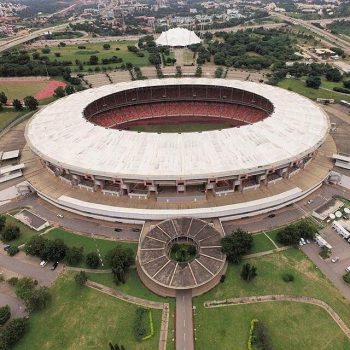 The president made the pronouncement during his speech at the Democracy Day celebration on Wednesday at the Eagle Square, Abuja.

Abuja National Stadium is a multipurpose national sports facility located in Federal Capital. It serves as a home pitch to the Nigerian national football team and other sports as well as a center for various social, cultural, and religious events.

The stadium was constructed to host the 8th All Africa Games which took place in October 2003.

M.K.O. Abiola won the June 12, 1993 presidential election in Nigeria but was denied his victory by the military regime of  General Ibrahim Babangida which annulled the results. In the struggle to actualize his mandate, Abiola was imprisoned without trial by another military dictator, General Sani Abacha who succeeded Babangida as Head of State.

The Buhari government last year revisited the June 12 saga which many Nigerians regard as the darkest chapter of their country’s political history. At an elaborate ceremony in Abuja, Abiola was honoured with the country’s highest honour of Grand Commander of the Federal Republic (GCFR)and by that endorsing him as a former president of Nigeria.

Some other Nigerians who fought for the actualization of Abiola’s June 12 mandate were also acknowledged and honoured at the ceremony.

In additon to the above, Buhari declared June 12 as Nigeria’s Democracy Day instead of the old date of May 29. Having signed the bill which makes June 12 a national holiday earlier in the week, the nation celebrated the first June 12 national holiday today. And, by renaming the Abuja National Stadium after Chief  M.K.O. Abiola, his place in the contemporary history of Nigeria appears to have been further underlined.