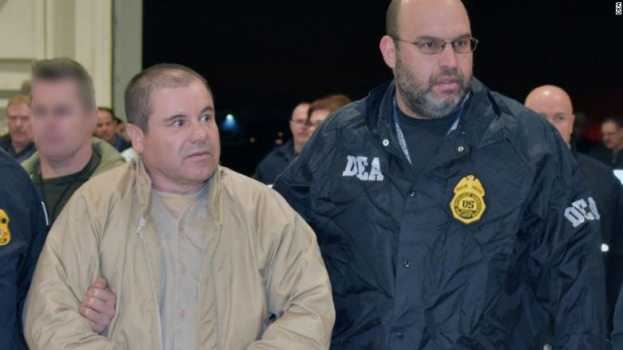 Notorious Mexican drug lord, Joaquin ‘El Chapo’ Guzman was on Tuesday sentenced  to life in prison for smuggling illegal drugs into the United States in a violent, decades-long career.

Testimonies from more than 50 witnesses showed how Guzman, who was convicted in February after an 11-week trial became the ruthless mastermind of Mexico’s Sinaloa cartel.

Jurors found the 62-year-old Guzman guilty of drug trafficking, money laundering and the use of firearms.

Speaking to the court before his sentencing, Guzman described his confinement in the US detention facility as a psychological, emotional and mental torture 24 hours a day. He also claimed he had been denied a fair trial.

At a hearing  in Brooklyn, New York, Judge Brian Cogan sentenced him to life, plus 30 years which was mandatory under the law.

During the trial, prosecutors gave evidence which provided an extraordinary glimpse into the brutal and lucrative world of Mexico’s Sinaloa cartel and how El Chapo became its mastermind, trafficking thousands of kilograms of cocaine, heroin, marijuana and methamphetamine.

“The overwhelming evidence at trial showed that the defendant was a ruthless and bloodthirsty leader. A life sentence is just punishment for this defendant,” prosecutors said.

Although his lawyers spent just 30 minutes presenting his defense, the jury  convicted him on all 10 of the counts he faced after hearing testimonies from more than 50 witnesses.

Before his eventual recapture in 2016, Guzman twice escaped from high-security prisons, including using a specially constructed one-mile tunnel leading from his cell.

The US government said Guzman, who is now set to be locked up in a ‘supermax’ prison in Colorado blew his cover through a number of slip-ups, including trying to make a movie about his life.

His lawyers  said they intend to appeal against the verdict.