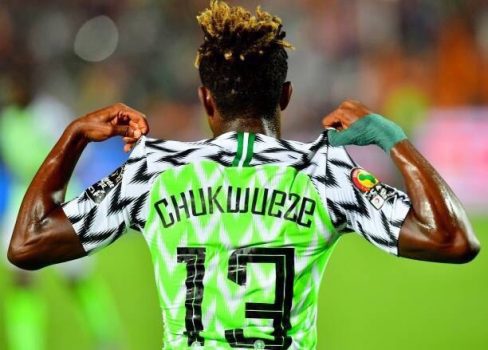 The Super Eagles of Nigeria on Wednesday night booked a spot in the semi finals of the ongoing African Cup of Nations (AFCON) in Egypt.

Villarreal of Spain forward, Samuel Chukwueze gave the Gernot Rohr’s men a 1-0 lead in the  27th minute after an assist from Arsenal’s Alex Iwobi.

However, South Africa levelled the scores in the 71st minute through a header by Bongani Zungu, thanks to Video Assistant Referee (VAR) which ruled that the ball had bounced off Odion Ighalo before getting to Zungu who was in an offside position.

With the match looking to head into extra time, Udinese’s William Troost-Ekong forced the ball over the line in the final minute of play off a well-taken corner kick by Moses Simon.

The Eagles will now face the winner of Thursday’s quarterfinal match between the Elephants of Ivory Coast and the Desert Foxes of Algeria.

In the other quarterfinal match played earlier, the Teranga Lions of Senegal defeated the Squirrels of Mali by a lone goal scored by Everton midfielder, Idrissa Gana Gueye in the 70th minute.

The Malians will now file out against the winner of Thursday’s other quarter final encounter between tournament debutants, Madagascar and Tunisia.