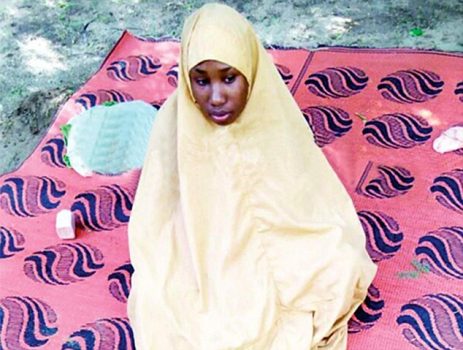 The Federal Government of Nigeria has reacted to the shocking news of the alleged death of Leah Sharibu, one of the Chibok school girls still held captive by Boko Haram insurgents.

The news of Leah’s death was made public by a viral video of abducted aid workers of Paris-based Action Against Hunger which was released by the Islamist sect.

In the emotional video, one of the abducted aid workers who identified herself as Grace Taku  pleaded with the Federal Government, the Christian Association of Nigeria (CAN) and other agencies to come to their rescue. She said:

“Some aid workers were caught and also asked to be released, but because Nigeria did not do anything about it, they were killed.

“I am begging on behalf of all of us here, that Nigerians should not allow such to happen to us. It also happened again to Leah and Alice because Nigeria could not do anything about them. They were not released. They were also killed.

I beg that Nigeria and our organization, Action Against Hunger should please do something and see that we are released. Thank you.”

Reacting to the video, the Presidency said it has been briefed by the responsible government agency about the disturbing video of the humanitarian aid workers held captive.

A statement released by Shehu Garba, the Media aide to President Muhammadu Buhari gave assurances that contact was being made as the government was currently negotiating with the captors.

The statement read: “Action Against Hunger aid workers video. The Presidency has been briefed by the responsible government agency about the disturbing video showing our citizens, the humanitarian aid workers held captive.

“Presidency has been given assurances that contact is being made and the captors are being talked to.

“Beside these aid workers, there are some others about whom this engagement is about, Leah Sharibu, a religious leader and all the others.

“These discussions have been ongoing even before this time and what this latest incident has done is to bring urgency to the efforts that the secret service is making.

“Government is making contacts, in the hope that the captors will see reason to not visit hardship or even harm on these innocent individuals.”