Tunisia Knocks Ghana Out Of AFCON 2019, To Face Madagascar In Quarter Finals 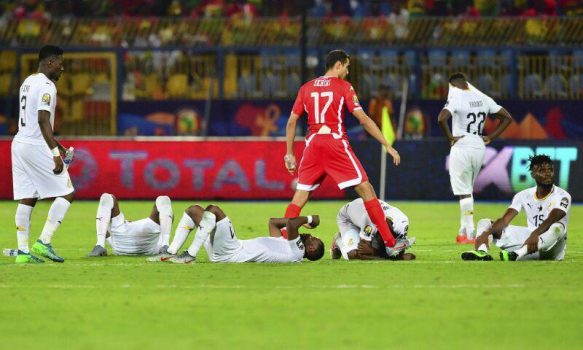 Tunisia on Monday night knocked the Black Stars of Ghana out of the ongoing 2019 African Cup of Nations (AFCON) holding in Egypt after a dramatic penalty shootout .

After a barren first half, the Tunisians took the lead as Taha Yassin Khenissi’s 73rd minute shot went into the post but the Black Stars levelled in stoppage time after Rami Bedoui headed into his own net to force the match into extra time.

With either side unable to find a winner in the 30 minutes of extra time, the match went into penalties with Caleb Ekuban’s miss proving costly for the Black Stars.

Tunisia will now move on to face Madagascar who defeated the Democratic Republic of Congo also on penalties in the quarterfinals on Thursday.

In other quarterfinal fixtures, the Teranga Lions of Senegal will slug it out with the Squirrels of Benin on Wednesday. Nigeria’s Super Eagles face South Africa later the same day while Ivory Coast will take on Algeria on Thursday night.