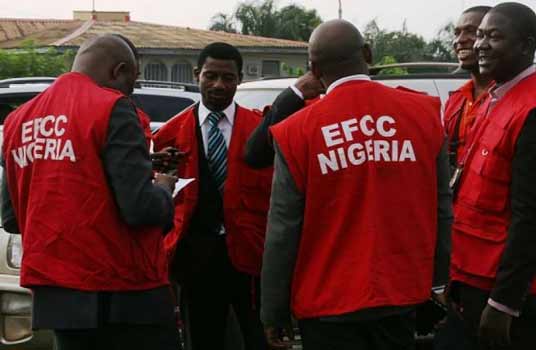 As the Federal government intensifies the probe of $16 billion spent by the Obasanjo administration on power projects, the Economic and Financial Crimes Commission (EFCC) has arrested four persons for allegedly making cash payments to the tune of over N80 billion.

The anti-graft agency is currently beaming its searchlight on what happened to the $8.5 billion released by the Obasanjo government for the payment of compensation to host communities where the multi-billion power projects were to be sited.

Most of the  communities where the power lines were to be laid have vehemently denied receiving any monetary compensations despite clear and documented evidence that the money was withdrawn from the Excess Crude Oil Account and paid to the Niger Delta Power Holding Company (NDPHC) for onward payment to the land owners. Records at the NDPHC have also confirmed that the payment had since been made to the benefiting communities’.

However, in a bid to unravel the true position regarding the alleged payments, operatives of the EFCC on Wednesday detained two key officials of the NDPHC over their alleged involvement in the payment of N84 billion to the host communities.

The EFCC confirmed that Marvel Emefiele, Head Finance and Eze Odigbo, Head, Compensation of the (NDPHC) were detained in connection with how the cash meant for the payment of compensation to many communities was handled.

“The two key officials of NDPHC are being detained by the EFCC following their alleged involvement in bogus payment and diversion of about N850 million  compensation to communities where the components of the power project were sited,” the EFCC said.

The Commission added: “Investigation revealed that approval was granted for the payment of N84 billion to the communities where transmission lines of the power project are meant to be laid.

“Our team of investigators discovered that the money was not paid to the benefiting communities after the huge sum was officially signed off from the books.

“It was also discovered that though about N50 billion compensation was reportedly ‘paid’ to the communities, the contractors were driven away by the irate communities over non-payment of the same compensation which the NPDHC claimed to have paid.

“While Mr. Emefiele reportedly approved the payment of N850 million, Mr. Odigbo is said to have effected the payment of the compensation to the communities. The duo are being quizzed over the propriety of the matter.

Also taken into custody by the EFCC along with the two men are the Managing Directors of two leading Nigerian engineering firms.

One of them, Richard Ayibiowu is being detained in connection with the payment of N350 million to some communities while the other, Christian Imoka  was in charge of  LOT 8 of the power project at Iheala Olu Transmission Line which was not executed.

Imoka, a Chief Executive of an engineering firm is also being detained over another controversial payment for a N500 million contract connected with LOT 14 of the  power project which was to include the Lekki-Ajah Transmission Line.

According to the EFCC, the detained officials failed to honour previous invitations from the Commission.