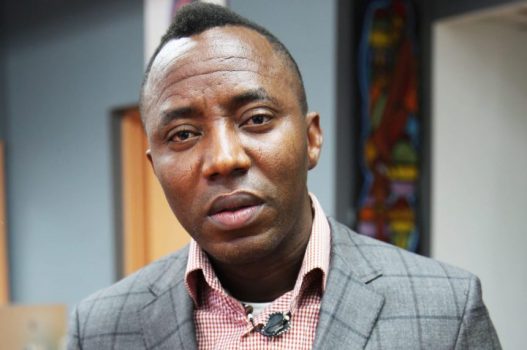 The convener of the RevolutionNow protests, Omoyele Sowore on Tuesday denied the allegation by the Department of State Services (DSS) that he met several times with foreign collaborators in Dubai, the United Arab Emirates to strategize on how to topple the government of President Muhammadu Buhari.

Sowore, the presidential candidate of the African Action Congress (AAC) in the February presidential election also debunked the agency’s allegation that he received millions of dollars from the alleged collaborators to sponsor widespread attacks on the current government in Nigeria.

Sowore, who has been in DSS custody since August 2, 2019 made the rebuttals in an affidavit filed  before the Federal High Court in Abuja in support of his motion challenging the order for his detention which the court issued at the instance of the DSS on August 8.

In the affidavit, Sowore maintained that he had never received any money from any person or organizations for the purpose of toppling any government, adding that he willingly provided his local and foreign banks’ account details to the DSS.

The activist further stressed that he never planned a coup as claimed by the DSS but only mobilized Nigerians to protest against the ‘crises of corruption, maladministration, mismanagement of the economy and insecurity’.

The ‘further affidavit’ which was deposed to on his behalf by one of his lawyers, Mr. Marshall Abubakar of Femi Falana’s law firm said Sowore never planned a coup but ‘‘mobilized the Nigerian people, including students and youths, workers, market women and other oppressed people to influence the Federal government, the 36 state governments and 774 local governments to address the crises of corruption and insecurity’’ in the country.