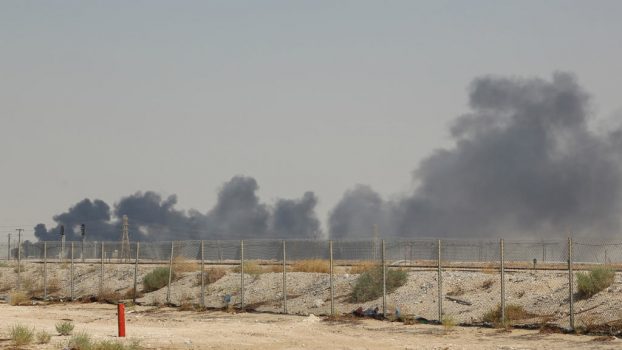 The Iranian government has dismissed accusations by the United States that it was behind drone attacks on Saudi Arabia’s oil plants, warning that it is ready for a full-fledged war.

The United States has issued satellite images and cited intelligence to back its claim that Iran was behind attacks on major Saudi oil facilities.

Tehran has however denied any involvement in Saturday’s air attacks which were claimed by Iran-aligned Houthi rebels in Yemen.

This is even as unnamed US officials speaking to US and international media say the direction and extent of the attacks cast doubt on whether the Houthi rebels were involved.

US Secretary of State, Mike Pompeo blamed Iran at the weekend for the attacks which have  cut global oil supplies by 5 percent and caused prices to soar without providing any evidence.

He wrote on Twitter: “Tehran is behind nearly 100 attacks on Saudi Arabia while [Iran’s president and foreign minRouhani and Zarif pretend to engage in diplomacy.

“Amid all the calls for de-escalation, Iran has now launched an unprecedented attack on the world’s energy supply.”

Spokesman for Iran’s Foreign Ministry, Abbas Mousavi said Washington had adopted a maximum pressure strategy against Iran but is now leaning on ‘maximum lies’ after its failure.

Mousavi’s remarks came as a senior commander in Iran’s Revolutionary Guards, Amirali Hajizadeh said America’s military bases and aircraft carriers, which are stationed up to 1,243 miles around Iran were within range of Iranian missiles.

Hajizadeh was also quoted by the Tasnim news agency as saying that Iran has always been ready for a full-fledged war but without mentioning Saturday’s explosions in Saudi Arabia.

The drone attacks, which Yemen’s Iranian-backed Houthi rebels claim they carried out  have halted around half of Saudi oil supplies after hitting the kingdom’s biggest processing facility and a major oil field.

They set off huge fires, leading to a suspension of production operations at the Abqaiq facility and the Khurais field, located about 200 miles northeast of the Saudi Arabian capital, Riyadh.