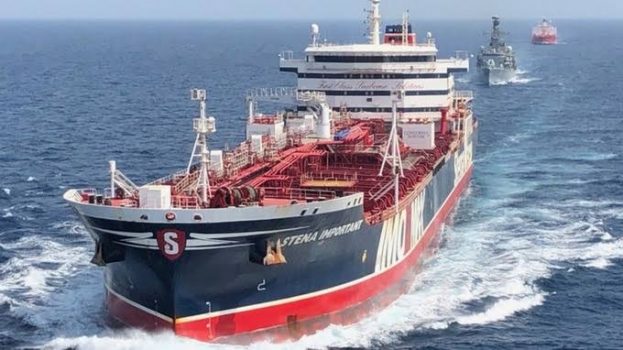 A British-flagged oil tanker, the Stena Impero has left Iran after being detained for more than two months.

Stena Impero’s Swedish owner, Stena Bulk on Friday morning said the tanker was on the move from the Bandar Abbas port where it has been anchored since July.

The vessel was seized by Iranian troops in the Strait of Hormuz after they accused it of breaking maritime rules.

The CEO of Stena Bulk, Erik Hanell said the vessel would head to Dubai, where the crew would be debriefed and receive medical checks.

“The families of crew members have been informed and the company is currently making arrangements for the repatriation of its valued seafarers at the earliest possible opportunity,” Hanell said in a statement.

The tanker’s seizure on  July 19 came two weeks after an Iranian tanker suspected of violating European Union sanctions on Syria was detained in Gibraltar with the help of the United Kingdom’s Royal Marines. The ship was however released in August.

The operation against the Stena Impero was seen as a retaliation for Britain’s role in helping to seize the Iranian vessel, an allegation which Tehran denied.

The Stena Impero was passing through international waters in the Strait of Hormuz, a narrow waterway which connects the Gulf and the Indian Ocean  when it was detained by Iran’s Islamic Revolution Guard Corps.

Iran accused the vessel of colliding with a fishing boat and failing to respond to calls but the ship’s owners insisted that there was no evidence to support that claim.

The UK said it deployed a Royal Navy frigate to come to the tanker’s aid and warned Iranian authorities that their actions were illegal but the frigate was unable to reach the scene on time.

The Stena Impero was then transported to the port of Bandar Abbas, where it had remained anchored since then.

Seven non-essential members of its crew were freed by Iran on humanitarian grounds earlier this month while sixteen crew members consisting of thirteen Indians, two Russians and one Filipino are believed to still be on board.