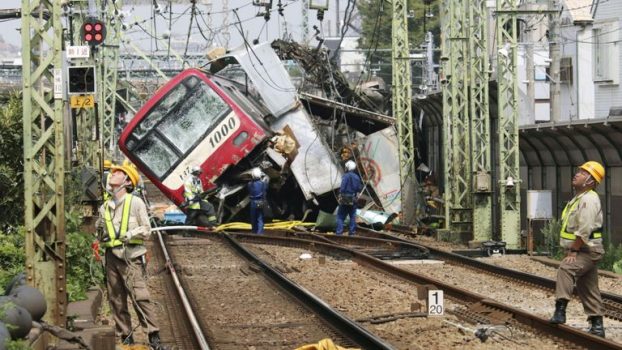 A truck driver has died and dozens more people have been injured after a passenger train collided with his vehicle at a rail crossing in Yokohama, Japan’s second largest city on Thursday.

The driver, a man in his 60s was pulled out from the wreckage and taken to hospital in a serious condition and he later died. One woman is said to have been seriously hurt while more than 30 others were less seriously injured.

The commuter train was partly derailed after it crashed. Pictures taken at the scene showed flames billowing from the mangled truck which was loaded with boxes of citrus fruit and several derailed carriages of the train.

According to train company, Keikyu Corp, the driver braked sharply as he saw the truck reach the crossing just before midday on Thursday but was unable to bring the vehicle to a stop in time.

A passenger on the train who said his neck was hurt in the crash recalled that the train stopped abruptly after hearing a honking, before seeing the flames from the truck.

Japanese police and transport authorities have launched an investigation to determine the cause of the crash which occurred on a railway crossing close to a station used by more than 19,000 people a day.

The accident has also halted services on the busy rail link used by commuters travelling to and from Tokyo and it is not yet known when journeys will resume.