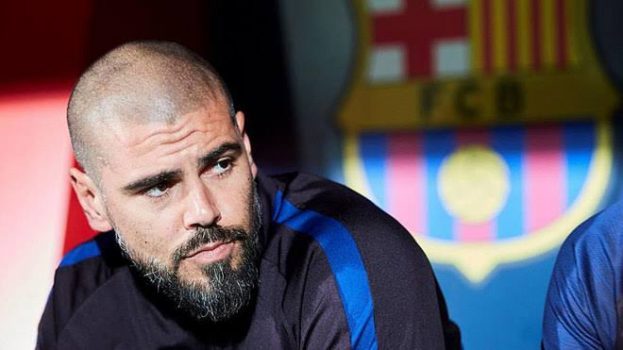 The management of Barcelona Football Club of Spain have sacked Victor Valdes as coach of its Under-19s side after a bust-up with former team-mate and La Masia Director, Patrick Kluivert.

The 37-year-old Valdes who made over 500 appearances for the club was appointed the youth team coach in July while Kluivert took over as head of La Masia Academy but the pair endured a bitter relationship.

Confirming the development, a statement issued by Barcelona on Monday read: ‘FC Barcelona have informed Víctor Valdés on Monday that he is no longer U19A coach and no longer employed by the Club.

According to a report by Mail Online, Kluivert and Valdes who played together at the Nou Camp from 2002 until 2004 fell out over a number of issues, the most significant being Valdes’ reluctance to adapt his formation to a rigid 4-4-2.

It was also gathered that Valdes was also unhappy with Kluivert and the club’s decision-makers for not being able to use the Estadi Johan Cruyff as the Under-19s ground because the B team and women’s team play there.