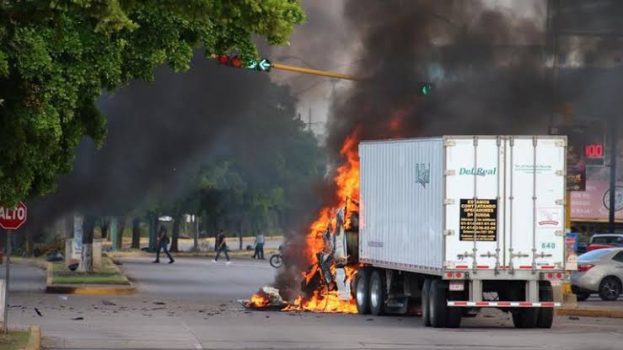 One of the sons of notorious Mexican gangster, Joaquin ‘El Chapo’ Guzman has escaped arrest after his cartel surrounded and overpowered the Policemen who had come for him in the Mexican city of Culiacan.

Officials say the Policemen who were ambushed after roadblocks were set up to stop them came under heavy gun attack and a decision was taken to retreat from the scene to protect innocent lives.

Ovidio Guzman, who is accused of drug trafficking in the United States was one of the four people discovered by the Mexican Natiional Guard inside a house in Culiacan.

The gangsters had set up roadblocks and were reported to have unleashed heavy automatic gunfire in the area which has long been a stronghold for the Guzmans’ Sinaloa cartel.

Images taken at the scene showed dead bodies strewn across the street. Some of the dead appeared to be unarmed.

Reacting to the attack, the Mexican Security Minister, Alfonso Durazo said: “The decision was taken to retreat from the house, without Guzman to try to avoid more violence in the area and preserve the lives of our personnel and recover calm in the city.”

According to the Minister, around 30 members of the national guard were fired at from a house accommodating the jailed rug baron’s son.

The 62-year-old El Chapo was sentenced to life in prison plus 30 years at a Super Max facility in July for his decades-long career of drug smuggling in Central and North America.

It is believed that Ovidio, along with his other brothers are still influential figures in the Sinaloa cartel despite their father being imprisoned. He is also on a number of wanted lists due to his links with the drug cartel.

Guzman’s drugs cartel is believed to now be led by IIsmael’El Mayo’ Zambada alongside El Chapo’s sons. They have all been accused of distributing drugs such as cocaine, methamphetamine and marijuana.

Riodice, a news service based in the city reported that gunmen were driving around the city in trucks, with one armed with a mounted machine gun while locals hid in supermarket aisles and took cover in the streets.