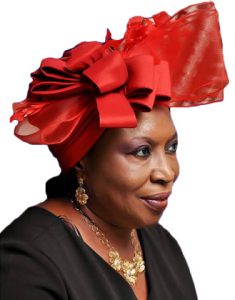 Lady Chikwue Ochiagha was born in Zaria, Kaduna State, Nigeria. She finished her secondary school education in Anambra State, and passed out in Division One in the West Africa School Certificate Examination (WASCE).

Lady Ochiagha attended Ahmadu Bello University, Zaria, Kaduna State, Nigeria where she obtained her Bachelor of Laws (LLB – Hons) – Second Class Upper Division in 1985. At the university she was rewarded for being the best student in the Faculty of Law in her first year with the Federal Government of Nigeria Merit Award, which earned her a scholarship for her subsequent senior years of her degree programme.

She attended and passed the Nigeria Law School in 1986, and was enrolled at the Supreme Court of Nigeria as a legal practitioner.

She began her legal practice in the law firm of Onyeabo Obi & Co. In 1990, she set up her own practice, T. Chikwue Ochiagha & Co. In 1996, after the mandatory recommendations of seven High Court Judges, she was appointed a notary public.

She bagged her Masters Degree in Law (LL.M) at the University of Lagos, Nigeria.

Lady Ochiagha has been an active worker in Non-Government Organizations particularly through The Young Women’s Christian Association. At various times she served as the chairman of the Fund Raising, Publicity and Personnel Committees, Vice President and The National President of the association. She also attended many international seminars. She has attended the United Nations Commission on the Status of Women (CSW) meetings held in New York, USA, since 2000 to date, every year. She also attended the United Nations World Conference against Racism (WCAR) in Durban, South Africa, in 2001.

Lady Chikwue Ochiagha has remained steady in the pursuit of Women’s Rights and Gender Justice with over 25years of experience which include legal representations. She has engaged severally in open street and open market campaigns on Violence against Women. She has issued various press statements in same regard. At the 59th CSW (Beijing + 20) of 2015 at UN headquarters New York she pioneered a parallel event as the National President YWCA of Nigeria on “Global Responses to Significant Engagement of Women in Power and Decision Making”. Following this was a press statement published by many newspapers including The Guardian of 8th October, 2015 declaring as unacceptable the then drop from 30% to 8% of women inclusion in ministerial appointments as released by the Nigerian government at the time.

Then at CSW61 of 2017 she hosted another high level parallel event on “Engagement for Sustainable Women Economic Empowerment initiatives in Nigeria.”  In 2018 at the UN CSW62 she hosted yet another parallel event on the theme, “Accelerating Gender Equality Campaign to End Women’s Poverty”.

In 2003 she pioneered and launched campaigns on HIV/AIDS with three captions namely, “Your Voice Counts: HIV/AIDS Is No Respecter of Persons, Act Now!!!”, “If You Have AIDS Accept Your Fate, Save Humanity From Destruction, Don’t Spread AIDS”, and “Prolong the Life of People Living With AIDS, Show Love.” She collaborated with UNIC Lagos Nigeria to mark the 2015 International Day for the Elimination of Violence Against Women and Girls with the theme, “PREVENTION”.

She engaged actively In Fund Raising Activities in furtherance of human rights activism in Nigeria. She worked in remote communities on campaign against Female Genital Mutilation (FGM) and also participated in radio programmes on the same subject through which she condemned and argued for the elimination of all harmful practices against women.

She is resourceful and courageous in her activism to better the promotion of women’s rights in order to free Women from Violence and Discrimination. She is committed and desirous to continue on the frontlines of justice and gender equality to bring about positive change for women and their communities. Recently, she has been engaged in the massive empowerment of young women to build their capacity towards realizing their full potential for nation building.

On June 15, 2015 she organized a programme to mark the African Day of the Child which focused on early marriage around the general theme: “25 Years After the Adoption of the African Children’s Charter: Accelerating Our Collective Efforts to End Child Marriage.” Under her leadership, YWCA of Nigeria participated fully in the sensitization which helped the passing into law of the Violence Against Persons Prohibition (VAPP) Act.

As part of her effort to care for women and children, she led a team in 2012 to visit and donate to flood victims in a camp in Onitsha, Anambra State, Nigeria.

She has been the Registrar of the Diocese of Lagos Mainland from 2006 till date. For many years, she was a Captain of the Girl’s Brigade, 8th Mainland Company.

She is married to Sir (Engr) Ikechukwu Ochiagha, both of whom were honoured with the investiture into the Knighthood of St Christopher in the Year 2001. Their marriage received The Couple of the Year Award from the Diocese of the Lagos Mainland on the 17th November, 2007.

In recognition of her philanthropy and service to the welfare of the society, she was given The Achievers Award by the Lagos Branch of the Red Cross Society. She received an Episcopal Award in 2010 for Excellent Services .and many other awards.  She was elected as Fellow of the Institute of Management Consultants in recognition of outstanding academic and professional standing, and demonstrated commitment to creating, maintaining, extending and promoting the highest world standards of management consulting practice, ethics competence and client service.

The Young Women’s Christian Association (YWCA) of Nigeria conferred her with Life Membership and presented her with a certificate in recognition of her contributions to promoting the vision and aims of the YWCA.

It is in recognition of her contribution to national development in the area of Women Development and Empowerment in Nigeria that Lady Chikwue Ochiagha is deemed worthy to be conferred with the Woman of Merit Gold Award.