Over 70 Killed As Fire Engulfs Moving Train In Pakistan 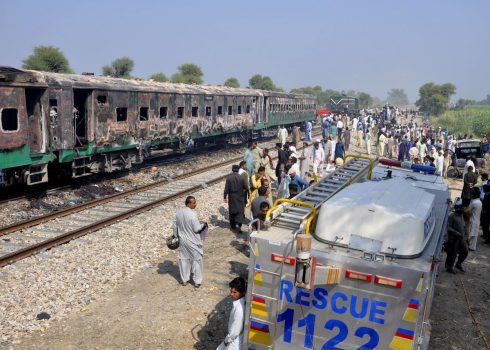 At least 70 people were killed and scores injured on Thursday as a massive fire broke out on a moving train after cooking gas stoves carried by some passengers exploded in Pakistan‘s Eastern Punjab province.

The train, Tezgam Express was on its way to Lahore from Karachi when the fire broke out, destroying three bogies at Liaquatpur near Rahim Yar Khan, some 400 kilometres from Lahore.

The country’s Railway Minister, Sheikh Rashid Ahmad said most of the victims belonged to the Tableeghi Jamaat (Islamic preachers) who were going to Lahore to attend a major annual congregation at Raiwind.

Ahmad further disclosed that gas stoves carried by some passengers blew up when they were preparing breakfast on the speeding train, which was in violation of rules.

“Some of the passengers started making breakfast on small gas cylinders they brought with them when they exploded and the fire engulfed the three coaches of the train,” he said.

The minister said most of the deaths occurred from people jumping off the train, adding that the toll could rise further as more than 40 passengers had suffered severe burn injuries.

A statement by the Pakistani military said rescue operation is underway and army helicopters are helping to shift the injured persons to various hospitals.

Reacting to the tragic incident, Prime Minister Imran Khan expressed his grief over the inferno and directed authorities to provide the best medical treatment to the injured.

The authorities said they were still trying to identify the victims and that the lists of fatalities and those injured were not ready yet.

Media reports suggested that railway officials did not notice passengers carrying individual gas stoves onto the train. This is even as safety regulations are often ignored on overcrowded trains in Pakistan.

Television footage from the scene showed the flames raging through the train as firefighters struggled to get it under control.

This is the latest tragedy to hit the country’s dilapidated and poorly maintained rail system. In July this year, eleven people were killed in an accident while four persons died in another accident in September.

In 2005, around 130 people were killed when a train rammed into another one at a station in Sindh province and a third train hit the wreckage.