Protests Paralyze Catalonia As Fugitive Ex-Leader, Puigdemont Turns Himself In 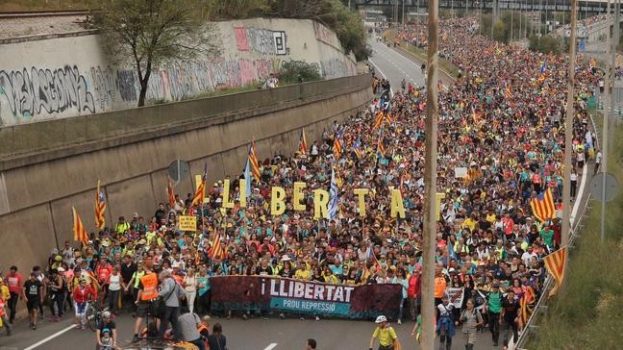 Hundreds of thousands of people are taking part in a fifth day of protests in Barcelona following the sentencing of nine independence leaders.

The series of marches are causing major disruption in the region with dozens hurt in Thursday’s clashes with security operatives. At least 80 people, including 46 police officers were injured during the most violent of four nights of rioting.

The demonstrations come as fugitive ex-Catalan leader, Carles Puigdemont turned himself in to Belgian authorities after the Spanish government issued a fresh warrant for his arrest.

Puigdemont’s office said he had voluntarily appeared before Belgian officials while rejecting the warrant and opposing any attempt to send him back to Spain.

Unions from across Spain’s northeastern region of Catalonia have also called for a general strike after Monday’s Supreme Court ruling which saw nine politicians and activists jailed for up to 13 years over their role in a failed 2017 independence bid.

Around 46 flights into and out of the region have been cancelled due to the latest industrial action, with the El Classico football match between Barcelona and Real Madrid scheduled for October 26 postponed to avoid coinciding with a large rally planned for that day.

Major roads have also been blocked across Catalonia, even as several main streets in Barcelona have been closed to traffic. Regional trains and the city’s metro are running on a reduced timetable.

Some demonstrators have blocked the border with France at the major crossing point of La Jonquera.

A statement from the office of Spain’s caretaker Prime Minister said 33 people have so far been arrested.

The Spanish leader, Pedro Sanchez is due to meet with experts from the interior and other ministries to analyze the security situation. He said the clashes would not provoke him into taking drastic measure.

After a surge in separatist sentiment since the global economic crisis which hit Spain, around half of Catalonia’s 7.5 million residents have been clamoring to break away and forge a new European country.