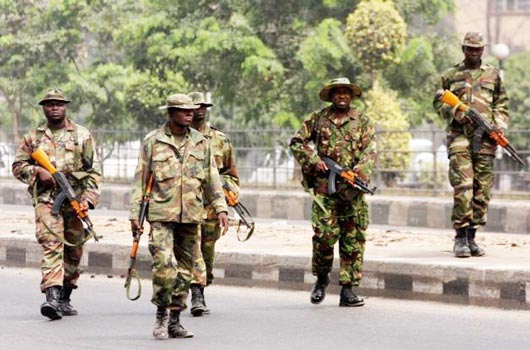 The Nigerian Army on Sunday said it has arrested eight Boko Haram suspects in connection with plans to attack facilities in Lagos  State.

The insurgents had about two weeks ago made attempts to attack one of the universities in the state but operatives of the 81 Division beat them to their game.

Four persons directly involved in the botched plan were arrested and immediately whisked to the Army Headquarters in Abuja for further investigation.

It was further gathered that four other suspected members of the Islamist terrorist group who were arrested within that period confessed their membership of Boko Haram.

The General Officer Commanding (GOC), 81 Division, Major General Olu Irefin said the eight suspects had been transferred to Abuja, assuring residents of the state that there was no cause for alarm as there was solid security architecture in place.

“There is no cause for alarm within 81 Division’s area of responsibility. We have been on top of our game on this Boko Haram issue. We are not sleeping and the people are assured of their safety throughout this period and beyond.

“Citizens can go about their lawful duties without panic because security agencies are doing a lot to protect them,” Maj.-Gen. Irefin said.

Over 60 suspected Boko Haram suspects have been arrested in different parts of Lagos since 2015.

In Septmber 2017, three suspected Boko Haram members hiding among the Hausa community in Isolo, Lagos Mainland were fished out by leaders and handed over to security agencies.

The Civilian Joint Task Force (CJTF) on March 29 last year arrested a suspect who was said to be the fifth in command of the sect in Lagos State.

On December 21 last year, a  Boko Haram leader identified as Umar, alleged to be behind the Kuje and Nyanya bombings was arrested by the Inspector-General of Police (IG) Intelligence Response Team (IRT) in Lagos at a relative’s place where he was hiding.