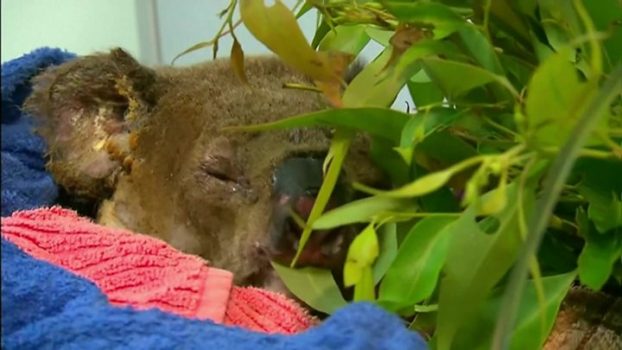 A koala which drew world attention after being rescued from an Australian bush fire has died after failing to recover from burns.

The koala, named Lewis had been taken to an animal hospital last week after a woman plucked it from a tree in a burning bush  in New South Wales.

Video of the rescue which shows Toni Doherty using her shirt to wrap up the koala was viewed globally. In the video, Ms. Doherty is seen pouring water over the distressed animal in an attempt to cool it.

“I didn’t realize they could cry out. It was just so heart-rending and I knew I needed to get him out of there as quickly as possible,” Ms. Doherty had told Nine News.

Vets said the 14-year-old marsupial was put down because its burns were not improving.

“The 14-year-old koala had significant burns to its chest, feet and other parts of its body. Our number one goal is animal welfare, so it was on those grounds that this decision was made,” said Port Macquarie of the Koala Hospital.

The hospital has treated dozens of koalas injured from the bush fires which have burnt through more than a million hectares in New South Wales alone.

Six people have died and more than 500 homes have been lost since a bush fires began ravaging Australia in September.