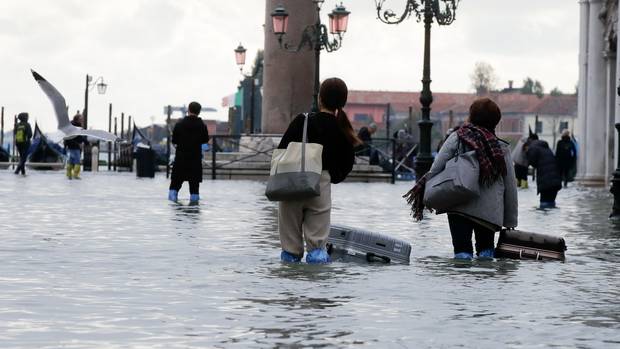 A state of emergency has been declared on the already flooded Italian city of Venice after it was hit by a new high tide of 160cm, giving residents no respite from a crisis costing millions of euros.

World-famous St Mark’s Square, a magnet for tourists has been closed and schools are shut for a third day. The city’s famous waterbuses, the ‘vaporetti’ have also stopped running.

The 187cm peak on Tuesday was the highest level for more than 50 years, damaging cultural monuments, businesses and homes, with more than 80 percent of the canal city flooded.

Following the floods, the Italian government has declared a state of emergency in the UNESCO world heritage site.

Residents with flood-damaged homes will get up to €5,000 while businesses will receive up to €20,000 in compensation.

The first flood sirens went off at dawn and within a couple of hours, the murky green water of the Grand Canal had risen level with its bank, slapping over the paving stones as boats passed.

Nearby streets quickly flooded as tourists, with their shoes covered in plastic bags carried their luggage along raised narrow trestle walkways, which the authorities have put up to keep the pedestrian traffic moving.

Venice is made up of more than 100 islands inside a lagoon off the north-east coast of Italy. It suffers flooding on a yearly basis.Only once since official records began in 1923 has the tide been higher than it reached this week, hitting 194cm in 1966.

The Mayor of Venice, Luigi Brugnaro has blamed climate change for the flood, describing its impact as huge and would leave a permanent and indelible mark on the city and its residents.

He added that the government would accelerate the building of structural defences for the city, referring specifically to the so-called Mose project which is a hydraulic barrier system to shut off the lagoon in the event of rising sea levels and winter storms.