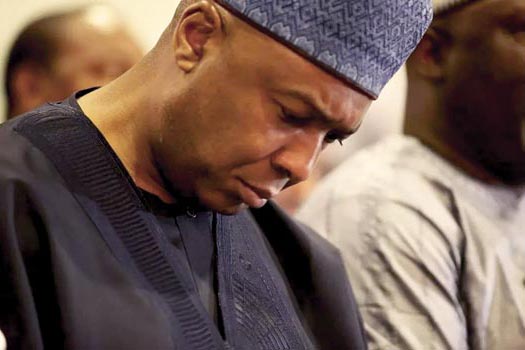 The Economic and Financial Crimes Commission on Monday secured an order of the Federal High Court in Lagos for the forfeiture of two houses in Ilorin, Kwara State belonging to the immediate past Senate President of Nigeria, Bukola Saraki.

An operative of the EFCC, Olamide Sadiq said in an affidavit filed in support of the ex parte application that the move for the forfeiture of the houses followed the findings of the EFCC after investigation and “the report of a committee set up to review sale of Kwara State Government property during the reign of the Governor of Kwara State in the year 2003 and 2011.”

Sadiq said, “Whilst the investigation was ongoing several fraudulent transactions were discovered. I know for a fact and verily believe that our investigation has revealed the following mind-boggling findings, among others:

“That between 2003 and 2011, Dr Olubukola Abubakar Saraki was the Executive Governor of Kwara State.

“That whilst he held the aforementioned position, the common pattern was that after payment of monthly allocation by the Federal Government to the Kwara State Government, a cumulative sum of not less than N100m would be deposited into the Kwara Government House account.

“That upon the payment of the said N100m, same will, in turn, be withdrawn in cash by one Mr Afeez Yusuf from the Kwara State Government House, Ilorin’s account in bits and brought to the Government House.”

Based on an ex parte application filed by the EFCC pursuant to Section 17 of the Advance Fee Fraud and Other Related Offences Act No. 14, 2006, Justice Rilwan Aikawa ordered the temporary forfeiture of Saraki’s two property designated as Plots No. 10 and No. 11 Abdulkadir Road, GRA, Ilorin, Kwara State.

Justice Aikawa also directed the EFCC to publish the temporary forfeiture order in a national newspaper and adjourned till December 17 for anyone interested in the property to appear before him to show cause why the property should not be permanently forfeited to the Federal Government.
Recommended stories you may like: