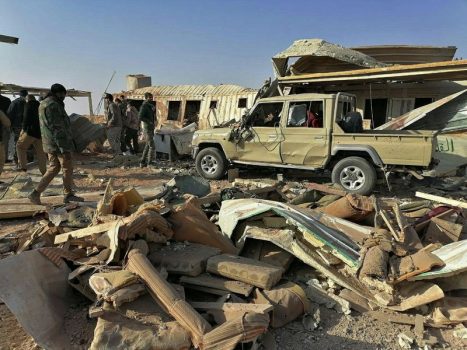 An Iranian-backed Iraqi militia on Monday vowed to  retaliate against United States military strikes in Iraq and Syria which killed 25 of its fighters and wounded dozens.

The US military carried out the Sunday strikes against the Iranian-backed Kataeb Hezbollah, raising concerns of new attacks which could threaten US interests in the region.

The US military said the ‘precision defensive strikes’ were conducted against five sites of Kataeb Hezbollah in Iraq and Syria in retaliation for last week’s killing of an American contractor in a rocket attack on an Iraqi military base.

Kataeb Hezbollah, which is a separate force from the Lebanese militant group, Hezbollah operates under the umbrella of the state-sanctioned militias known collectively as the Popular Mobilization Forces, many of them backed by Iran.

“Our battle with America and its mercenaries is now open to all possibilities. We have no alternative today other than confrontation and there is nothing that will prevent us from responding to this crime,” the group said in a statement.

The Iraqi government has also condemned the US attack, describing it as a dangerous violation of the rules of engagement which govern the work of US-led coalition forces in Iraq’.