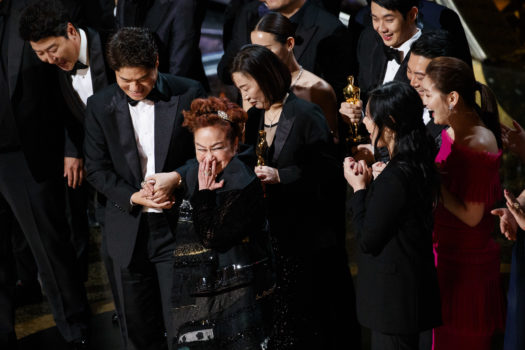 South Korean film, Parasite has been named Best Picture at this year’s Oscars, making it the first non-English speaking film to win the Academy’s most prestigious award.

The film is a vicious social satire about two families from different classes in Seoul – one who live in poverty in a semi-basement, and another rich family residing in a large home.

The movie scored multiple awards for writer and director, Bong during the evening including Best Screenplay, Best Director, and Best International Feature Film.

“I feel like I’ll wake up to find it’s all a dream. It all feels very surreal,” Bong said.

Producer Kwak Sin-ae, who collected the trophy, said: “I’m speechless. We never imagined this to happen. I feel like a very opportune moment in history is happening right now.”

Parasite is also the first film from a South Korean director to win the Best Picture, and the first with a primarily Asian cast. Parasite beat out Joker, Ford v Ferrari, The Irishman, Marriage Story, Little Women, 1917, Once Upon a Time in Hollywood, and Jojo Rabbit in the process.

Brad Pitt and Laura Dern won the supporting acting awards for their roles in Once Upon A Time in Hollywood and Marriage Story respectively. It was Brad Pitt’s first acting Oscar.