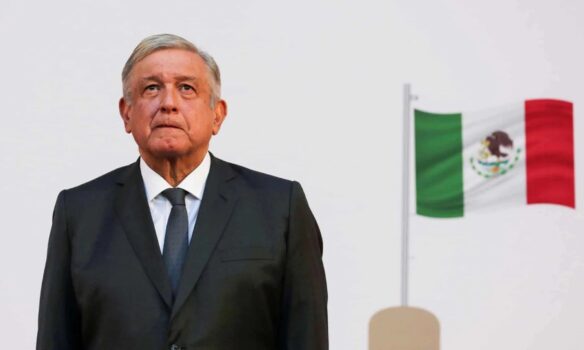 López Obrador, who has been criticized for his handling of Mexico’s pandemic and for not setting an example of prevention in public, said Sunday on his official Twitter account that his symptoms are mild and he is under medical treatment.

“I regret to inform you that I am infected with COVID-19. The symptoms are mild but I am already under medical treatment. As always, I am optimistic. We will all move forward. Dr. Olga Sánchez Cordero will represent me in the morning to report how we do it every day.” he tweeted.

Mexico’s president wrote that while he recovered, Interior Secretary Olga Sánchez Cordero would be taking over from him in his daily news conferences, at which he usually speaks for two hours without breaks each weekday.

López Obrador has rarely been seen wearing a mask and continued to keep up a busy travel schedule taking commercial flights.

Mr López Obrador says he will continue working from home, including speaking to President Vladimir Putin about acquiring a Russian-made vaccine.

It was announced earlier on Sunday that a call between the two leaders would take place on Monday to discuss their bilateral relationship and the possible supply of Sputnik V jabs.

The Mexican president said last year he would try and acquire 12 million doses of the Russian-made vaccine if it proved effective.

Mexico has recorded more than 1.75m virus cases since the pandemic began with deaths nearing 150,000.

The nation’s confirmed death toll of 149,614 is one of the highest in the world – behind only the US, Brazil and India.

February 26, 2021, No Comments on Tension As DSS, Police Attempt To Arrest Sunday Igboho

February 26, 2021, No Comments on Ondo Nurses To Commence 3-day Warning Strike On Monday

February 26, 2021, No Comments on Sheikh Gumi Hints On Identity Of Zamfara School Kidnappers

February 26, 2021, No Comments on Gunmen Abduct Over 300 Schoolgirls In Zamfara, Nigeria

February 25, 2021, No Comments on Northern Governors, Service Chiefs, Others Meet In Kaduna

February 25, 2021, No Comments on Northern Elders Slam Sheikh Gumi Over His ‘Revelation’