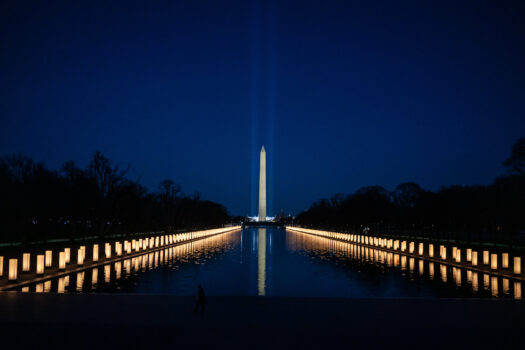 More than 500,000 people in the United States with coronavirus have died, according to Johns Hopkins University data, the highest death toll by far of any country in the world.

The country reached the harrowing tally on Monday, just about a year after the first known death was reported in the state of California.

At 5 p.m. ET, the Washington National Cathedral began ringing its bells 500 times in memory of the Americans who had lost their lives to the disease, and the American flag atop the White House was lowered to half-staff.

An hour later, President Biden addressed the nation from the White House.

“Today we mark a truly grim, heartbreaking milestone: 500,071 dead. That’s more Americans who have died in one year in this pandemic than in World War I, World War II and the Vietnam War combined,” Biden said.

“But as we acknowledge the scale of this mass death in America, we remember each person and the life they lived. They were people we knew, or people we feel like we knew.”

Meanwhile, as of Sunday, the US had distributed slightly more than 75.2 million vaccines across the country, according to the US Centers for Disease Control and Prevention (CDC).

More than 18.8 million people had received two doses of the vaccine, while another 43.6 million had received one dose.

More than 28 million Americans have tested positive for the coronavirus, out of more than 111,642,000 cases recorded worldwide.