Tambuwal Predicts Collapse APC, Party Says He Is In Self-Delusion 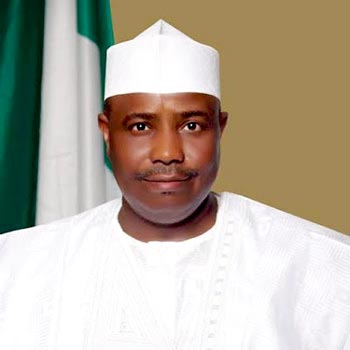 The Sokoto State Govrnor, Aminu Waziri Tambuwal, has said that the ruling All Progressives Congress, APC, will collapse because it has lost focus and confidence of the citizenry.

The governor further said that he was not surprised by the decision of the Sokoto State chapter of the party to boycott the March 27 local government elections, as the party had lost confidence and mandate of the electorate nation- wide.

Tambuwal was speaking to supporters of the People’s Democratic Party ( PDP) during the flag-off of the Sokoto East Senatorial zone campaign at Gwadabawa town in preparation for the council poll.

He said since it came to power, the APC-led Federal government has failed to deliver or execute any meaningful developmental project, making it lose the support of Nigerians, and as such will collapse, with its members dissolving into other political parties.

He further used the occasion to appeal to the Sokoto people to support and cooperate with security agents in their quest to provide security in all areas of the state.

Like Lagos, the Ondo State chapter of the APC quickly countered Tambuwal saying that he was living in self-delusion and playing to the gallery.

The Publicity Secretary of the APC, Lagos State, Mr. Seye Oladejo said :“We believe Tambuwal indirectly predicted the fate of PDP as a political party as a result of its permanent implosion before the next national elections.

“Unfortunately, he won’t receive a prize for his pointblank prophesy because of the obvious crisis that is tearing PDP apart in the various zones and the mutual suspicion and the crisis of confidence among its national leaders.

“The heart-warming performance of APC in different by-elections across the country and the increasing numbers on the floor of the National Assembly put a lie to Tambuwal’s assertion.

“However, I shouldn’t fault him for seeking comfort in self-delusion.”

The Ondo State chapter of the APC is of the opinion that “Governor Tambuwal was either misquoted or merely playing to the gallery.”

The party, through its Publicity Secretary, Alex Kalejaye, said: ”We are, however, not unaware that the PDP is unbelievably desperate about winning in 2023, and this results in their attacks on the ruling party.

”The APC- led federal government has initiated and executed meaningful projects across the country to the extent that no state is lagging behind. The party has undertaken these projects, not because we feel we are in competition with any other party, but we believe the country and, indeed, the people deserve better treatment.

“While the current administration is working for posterity, we are happy the informed observers are appreciative of the fact that we have changed the old narratives of endless wailing and sleeping on roads for days on account of dilapidated infrastructures.

“lt is expected and understandable that the Peoples Democratic Party should feel jittery over the ongoing
re-organisation in the ruling party, which is helping to rebuild its foundation for future challenges.

“The gale of defections that has hit the PDP since the advent of the Governor Mai Mala Buni-led APC Caretaker/Extraordinary Convention Planning Committee, CECPC, is a clear indicator that the opposition party is having sleepless nights over the renewed vigour of the ruling party.’’